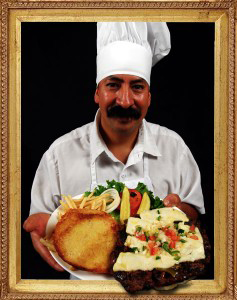 Mesilla – Peppers Café operates inside the Double Eagle and offers a casual atmosphere with a menu dedicated to New Mexican cuisine.  The Green Chile Cheeseburger, a traditional New Mexican specialty,is built on a special yeast roll bun, baked locally,  toasted with garlic-infused mayonnaise and topped by a seasoned and grilled one and a quarter pound patty of beef.  Roasted Mesilla Valley green chilies and a half pound of white New Mexico Queso Fresco cheese drape the huge 12 inch wide burger.  A sprinkling of the restaurant’s Pico De Gallo (chopped onion, tomato and jalapenos) over the cheese adds color and sharpness to the flavors.  Crisp Iceberg lettuce, slices of local tomato and New Mex Sweet onion plus a dill pickle slice join the large platter for service.

“We were reviewing all our menu items and we came to the green chile cheeseburger.  C. W. Buddy Ritter, owner, said that he could see no way to make it better so why not make it bigger.” said Jerry Harrell, General Manager.  “We laughed and moved on to the next item but that phrase “why not make it bigger” kept popping back into my mind.”

The very next day, Harrell assembled the kitchen team and threw down the challenge, ”I want the world’s biggest green chile cheeseburger.  How can we do it?” And experiments and testing began. Tests with customers were arranged and their reaction gauged and judged.  Finally on June 30, 2009, the owner, Buddy Ritter, looked over the huge bun at Harrell and the kitchen crew anxiously awaiting his verdict and, “It’s good!”  Sales began on July 1, 2009 and within the first 45 days over 200 of the huge burgers were sold.

“Customer reaction to the burgers has been overwhelmingly positive”, said Executive Chef Luke Roberts.  “Usually, we split it between 2 or 3 people but several men have consumed the entire burger and fries at one sitting.  It takes a little while to do but they have done it!” said Harrell.  More often people are just getting the smaller ‘regular size green chile cheeseburger” which is still half pound patty and enjoying those rather than taking on the monster burger Harrell noted.

New Mexico’s Green Chile Cheeseburger Trail
New Mexico didn’t invent the hamburger, but we’re the one who added green chile and made it hot! Sample this culinary treasure on your next trip, using our handy  [coming soon] Trail map and guide.

The Buzz About Our Burger… 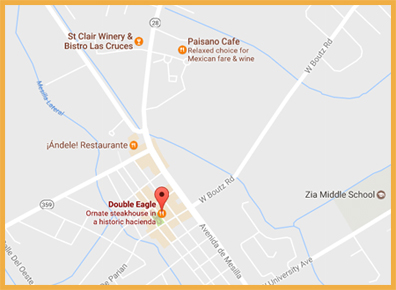